In June of 1969, the community of Avila dedicated a modern wastewater treatment facility to provide primary treatment with a separate sludge digester to serve an average flow of 200,000 gallons of influent per day. The facility was constructed with pleasing, architectural features including mission style tile roofs on both the digester and clarifier, Later, this plant included a unique, trickling filter to reduce odors.  The plant's foundation rests on 60 piles driven to a depth of 75 feet to ensure a solid foundation.

In 1997, the District dedicated a new section of the treatment facility to provide secondary treatment to the wastewater. The upgrade to the plant was mostly funded by a “Small Community Grant”, paying 93% of the cost of the project, while providing a high level of treatment to water being discharged to the ocean. The District continues to meet all current requirements for ocean discharge using an ocean outfall line which terminates off shore, approximately 1,200 feet beyond the end of the Avila Pier. The District obtained a grant from the Regional Water Quality Control in  2004, to improve the diffuser and extend the discharge line to its current location.

In 1976, arrangements were made to sub-lease water facilities from San Luis Obispo County Service Area #12, which had previously supplied Lopez Water to the area. Additionally, sub-leasing arrangements were established between the District and South San Luis Water Corporation, a privately owned, non-profit firm, for water distribution facilities.  Over the years, various improvements to the water distribution system have taken place. Currently, the District owns two water storage tanks with a storage capacity of approximately 840,000 gallons along with 46 fire hydrants. We currently serve 352 business and residential connections as of September 2016.

Since 2000, the District has contracted with CAL Fire to provide for emergency services. This contract was entered into in 1999 and provides a cost effective services benefiting both the Community of Avila Beach and the entire Avila Valley.  Emergency services are provided through Station 62 with back-up available from CAL Fire.

Avila Beach CSD allows the burning of yard waste by single family households or duplex residents.  For information on how to apply for a Burn Permit, click here. 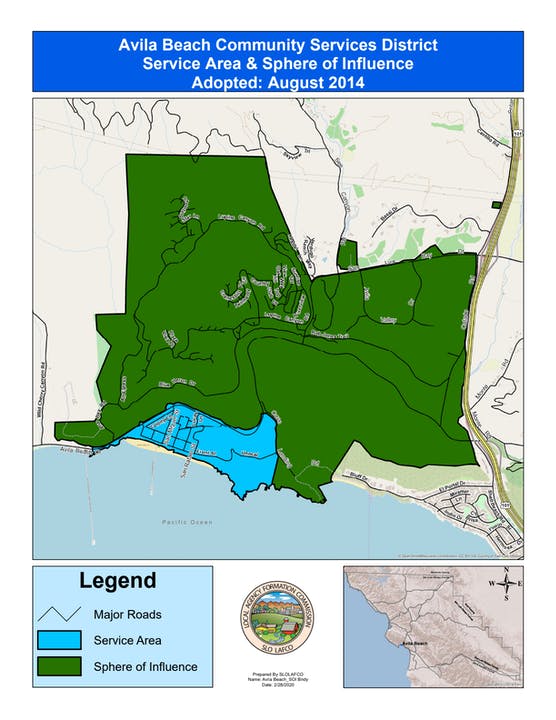 Our 2018 Consumer Confidence Report (CCR) is available with information about water quality.